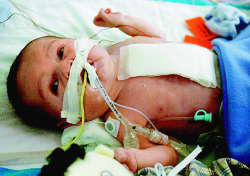 A human goes through several tyrannies during his lifetime. But what about the problems faced at just your birth. 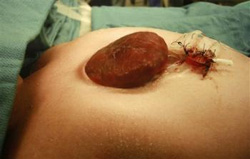 Hasni was delivered at 36 weeks through a Caesarean section on October 31 at Hotlz Children’s Hospital.

The operation went on for six hours where the surgeons wrapped Hasni’s heart in Gore-Tex, followed by a layer of his own skin, to substitute for his missing pericardium, which is the sac that enfolds the heart. The heart was then slowly eased inside his chest.

The defect was noticed during an ultrasound exam in late September after Naseem’s mother Michelle Hasni (33) began feeling some weird and unusual movement from the baby.

During the delivery the surgeons made a larger incision that normal to make certain that the heart would not be squeezed or touch any part of the womb.

Before the surgery, Hasni’s heart looked like a peeled plum sitting on the top of his chest, with the aorta dining back underneath the skin. Nonetheless, the heart was beating normally.

Dr. Eliot Rosekranz, a cardiothoracic surgeon said, “He’s not going to be able to play certain kind of sports where a blow to the sternum to you and me wouldn’t be a problem, but in him it would. So I think some competitive sports are going to be out. However he’s going to able to participate in other sorts of activities.”

In a few weeks time, a protective piece of plastic that will be worn over the chest will be fitted into Hasni. By the time he goes upto the age of 6 years; surgeons will graft pieces of his own ribs across his chest to create a sternum, or breastbone.

At present Hasni remains in a critical but steady condition.