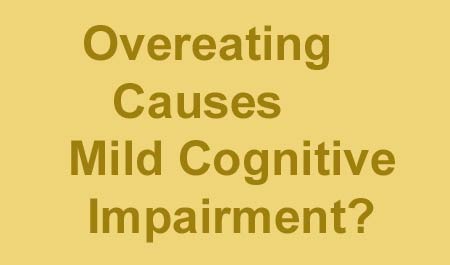 Binge eating is often claimed to be a kind of eating disorder that is linked to metabolic complications. This study conducted by professionals at the American Academy of Neurology (AAN) and Mayo Clinic has revealed that consuming about 2,100 to 6,000 calories on a daily basis may double the risk of mild cognitive impairment (MCI) or memory loss in elderly patients aged 70 and above.

In this trial, nearly 1,233 individuals in the age-group 70 to 89 who were devoid of dementia, participated. Among these individuals, almost 163 of them suffered from MCI. By means of a questionnaire, the team gauged the number of calories they consumed each day. While one-third of them reported of consuming 600 to 1,526 calories daily, another one-third of the volunteers consumed about 1,526 to 2,143 calories per day. The other group consisting of one-third of the subjects apparently consumed 2,143 to 6,000 calories each day.

“We observed a dose-response pattern which simply means; the higher the amount of calories consumed each day, the higher the risk of MCI,” remarked study author Yonas E. Geda, MD, MSc, with the Mayo Clinic in Scottsdale, Arizona and a member of the American Academy of Neurology.

As per the results, those who belonged to the high-calorie group seemingly encountered double the chances of suffering from MCI. Other factors like stroke, education and diabetes were adjusted in the analysis.

The team concluded that eating a healthy diet and controlling the amount of calories consumed may be a natural way to avert memory decline during old age. This report will be presented at the American Academy of Neurology’s 64th Annual Meeting in New Orleans.