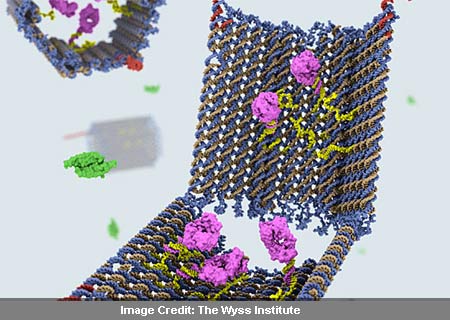 Can robotic technologies be used to destroy cancer cells? Probably yes, as scientists from the Wyss Institute for Biologically Inspired Engineering at Harvard University have developed a robotic device comprising DNA, which could have the potential to push cancer cells to self-destruction.

By means of DNA origami techniques, the investigators developed a nanosized robot that looked like a container with its 2 portions linked by a hinge. The DNA barrel is encapsulated by specific DNA latches that can gauge cell-surface proteins inclusive of disease biomarkers.

In cases of diseases like leukemia and lymphoma, the team made use of different antibody combinations in the devices. As per the outcomes, these nanodevices seemingly attached themselves to cancerous cells and delivered signals for their self-destruction.

“We can finally integrate sensing and logical computing functions via complex, yet predictable, nanostructures — some of the first hybrids of structural DNA, antibodies, aptamers, and metal atomic clusters — aimed at useful, very specific targeting of human cancers and T-cells,” quoted George Church, a Wyss core faculty member and professor of genetics at Harvard Medical School, who is principal investigator on the project.

As soon as the robotic device encounters its target, it gets reconfigured and molecular messages are transferred in and out of the mechanism. The analysts believed that this system could serve as an important avenue for treating a wide range of diseases in the long run.

The study is published in the February 16 issue of the journal, Science.