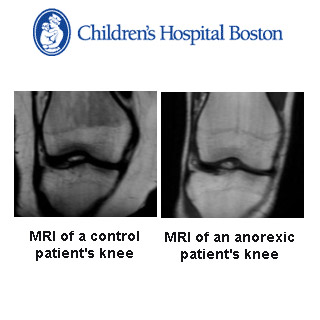 Here’s a tidbit that had could have readers really surprised. A study by scientists at the Children’s Hospital Boston interestingly found anorexics to have excess fat albeit in their bone marrow. This counter-intuitive finding appears to indicate a way for monitoring response tp treatment.

Paradoxically, individuals with anorexia nervosa were revealed to show significantly high levels of fat within their bone marrow. These results were based on MRI imaging of the knees of 20 girls who reportedly had anorexia along with 20 healthy girls with both groups averaging 16 years of age.

“It’s counter-intuitive that an emaciated young woman with almost no subcutaneous fat would be storing fat in her marrow,” explains endocrinologist Catherine Gordon, MD, MSc, director of the Bone Health Program at Children’s and the study’s senior investigator.

For the study, the knee MRI images were analyzed by radiologists who were not aware of the subject’s clinical status. On comparing it with controls, patients with anorexia had strikingly increased fat content that was seemingly visualized as yellow marrow. Apparently, it was less that half as much healthy red marrow in their knees. This was observed both in the lower thigh bone (femur) and upper shinbone (tibia).

Study co-author Clifford Rosen, MD, of the Maine Medical Center suggested that this discovery in the girls and young women appear to confirm earlier observations in mice that showed clinical signs similar to anorexia nervosa. As per earlier work, hormonal alterations that could be common in states of malnutrition could seemingly activate the bone marrow’s mesenchymal stem cells to differentiate into fat cells (adipocytes). It seems to do so instead of resulting in bone-forming cells (osteoblasts).

Both the mouse and human studies probably elucidate why individuals with anorexia nervosa could be losing bone mass. This could sometimes lead them to the point of developing osteoporosis and fractures.

“Bone formation is very low in girls with anorexia, and that’s a particular problem because they are growing adolescents who should be maximally forming bones,” mentions Gordon. “But because of the hormonal alterations induced by malnutrition, the bone marrow stops yielding the needed cells to form bone. Instead the stem cells are pushed toward fat formation.”

In order to know why this happens, follow-up studies have been planned by Gordon. The body’s attempt to store energy and preserve warmth is being seen as one speculation. Allegedly, anorexics may often develop hypothermia due to the absence of insulating fat. They are also often hospitalized with extremely low body temperatures.

In addition to this, the scientist also wants to observe how closely fat in the bone marrow could correlate with bone density. Whether measuring fat with noninvasive MRI scans might serve as one way of testing the efficacy of hormonal therapies aimed at improving bone mass is also something that’s being observed.

The study’s first author was Kirsten Ecklund, MD, of Children’s Department of Radiology.

The study appears in the February issue of the Journal of Bone and Mineral Research.