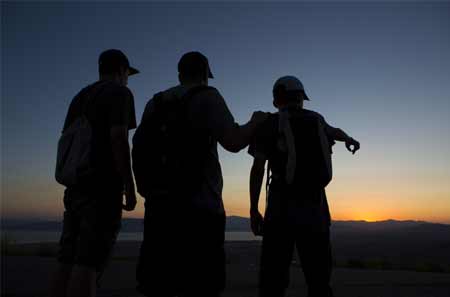 Coming as good news to all those proud fathers, scientists from the Brigham Young University have revealed that kids learn the art of perseverance from their dads. The team believed that fathers could help their teenage kids imbibe qualities such as persistence and resilience during difficult situations in life.

Reported in the Journal of Early Adolescence, the findings showed that fathers who are actively engaged in their kids’ lives may cause apparent beneficial differences in them. As part of the study, nearly 325 families were inspected for many years. The investigators found that children developed the ability to stay determined from their fathers. As the years passed by, such qualities led the kids to perform better at school and overcome delinquency.

“In our research we ask ‘Can your child stick with a task? Can they finish a project? Can they make a goal and complete it? Learning to stick with it sets a foundation for kids to flourish and to cope with the stress and pressures of life.There are relatively few studies that highlight the unique role of fathers. This research also helps to establish that traits such as persistence – which can be taught – are key to a child’s life success,” commented Laura Padilla-Walker and Randal Day.

The analysts found that almost 52% dads in the study conformed to authoritative parenting. This involves giving children the right amount of freedom, loving them and explaining the causes behind the rules to be followed. Such practices made the children persistent in achieving goals that eventually resulted in better academic performances. Moreover, they seemed to show fewer signs of delinquency, as compared to those with no perseverance.

Further studies will explore the influential factors in terms of single parenting.