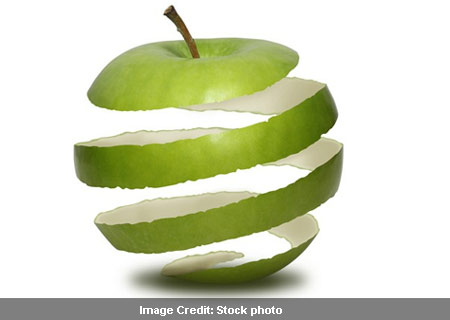 It seems diet could hold the key to weight loss, as a new analysis by scientists at the University of Iowa (UI) has revealed that apple peels may have calorie burning properties. Reported in the journal PloS One, the research showed that a natural constituent of apple skin can inhibit obesity in mice, to an extent.

This substance known as ursolic acid apparently reduced obesity and its accompanying effects in a set of mice. This result was achieved, as the ingredient seemingly increased the amount of brown and muscle fats, which are primarily responsible for lowering calories.

“Since muscle is very good at burning calories, the increased muscle in ursolic acid-treated mice may be sufficient to explain how ursolic acid reduces obesity. However, we were surprised to find that ursolic acid also increased brown fat, a fantastic calorie burner,” remarked Christopher Adams, UI associate professor of internal medicine and a Faculty Scholar at the Fraternal Order of Eagles Diabetes Research Center at the UI.

For the research, mice were exposed to high-fat foods and ursolic acid, the latter which appeared to increase skeletal muscle mass in the subjects. Likewise, it seemed to work against pre-diabetes, fatty liver disease and obesity. An interesting observation was that mice treated with the aforesaid acid ate more and adhered to the same levels of physical activity as the controls. However, the former did not gain as much weight as the control counterparts.

One reason for this effect is the calorie-burning property of muscle mass. Needless to mention, the increase in brown fat could be a primary contributor to weight loss. Initially, scientists believed that brown fat was only present in infants. Now it’s a well established notion that this fat is found in adults as well.