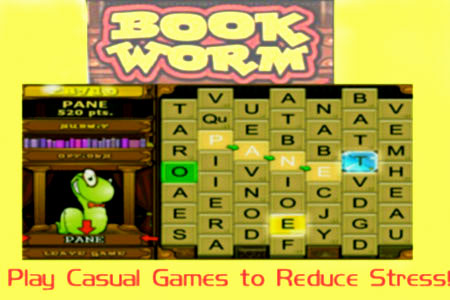 In this fast paced life, mostly everyone faces some or the other kind of stress. Everyone tries to find a solution to reduce stress levels. Some people practice yoga, meditation, exercise or take a stroll near the blue sea. But now there is one more stress buster added to the dozen to feel stress free – Play Casual Games! A new study from East Carolina University says that you should fire up any casual game.

The study revealed that casual video games such as Bookworm, Bejeweled 2 and Peggle prove to be stress-relieving and have several other mood-lifting effects. According to the study these games might be addictive and mystifying, but puzzles and quizzes would help in keeping your brain sharp.

The clinical study of the East Carolina University has attempted to gauge the impact of playing the so-called casual games on the players’ moods. The stress levels were also measured by changes in the heart rate, brain activity via electroencephalography and pre/post-gaming mood state profiles.

The results of the study are fascinating and inspiring to play games. It portrayed that casual video games can have a considerable positive impact on an individual’s mood and stress levels. East Carolina University is planning to start clinical trials to find out the therapeutic value of the games.
PopCap funded this causal game study, and has been aiming to enumerate the audience and the benefits of casual gaming.

The study was conducted by including 134 subjects, 31 of who served as a control group. The others were examined while playing PopCap games Bejeweled 2, Bookworm Adventures, and Peggle. The study even checked the heart rate variability, composed the psychological data based on pre- and post-activity interviews, and took electroencephalograms (both baselines and during game play) in an effort to evaluate subjects like tension, anger, depression, vigor, fatigue, and confusion.

The findings of the study were that playing casual games gave prominent impacts on all the above characteristics. There was a difference in the performance in the amount of games played and considering the gender of the players; for example female contestants playing Peggle showed a 40 percent greater improvement in mood than males.

Dr. Carmen Russoniello, associate professor of recreational therapy and director of the Psychophysiology Lab and Biofeedback Clinic at ECU’s College of Health and Human Performance said,” The results of this study are impressive and intriguing, given the extent of the effects of the games on subjects’ stress levels and overall mood”.

“When coupled with the very high degree of confidence we have in those results based on the methodology and technologies used, I believe there is a wide range of therapeutic applications of casual games in mood-related disorders such as depression and in stress-related disorders including diabetes and cardiovascular disease.”