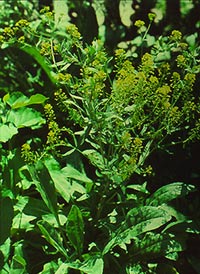 A plant that gave ancient Britons and Celts their blue war paint, has been found to be a rich source of the anti-cancer compound, glucobrassicin, traditionally associated with broccoli. Glucobrassicin has been found to be effective against breast cancer. The war paint, a blue dye, is obtained from Woad, a member of the Brassicaceae family and this has been used traditionally as war paint sported by the ancient Britons and Celts.

Stefania Galletti and her team at the University of Bologna, Italy, found that the plant contains twenty times more cancer fighting chemical glucobrassicin than its relative, broccoli, which they enhanced to nearly 65 times using various treatments. This compound plays a defensive role in plants, and the researchers found that wounding the leaves can increase levels by 30%.

When leaves are damaged, for example, by insects, glucobrassicin is released as a defense mechanism. Its derivatives can kill some plant pests, and also appear to have anti-tumoral properties, and are particularly effective against breast cancer.
Glucobrassicin has shown an active role in flushing out cancer-causing chemicals including derivatives of estrogen. Women with higher levels of this hormone are at an increased risk of developing breast cancer.

There have been many reports on the health benefits of broccoli and other commonly consumed vegetables from the same family. However, it has been difficult to extract enough of the broccoli compound to carry out extensive tests. Galletti’s team hope that by using this cheap, rich source, in depth research can be carried out to study how this compound acts in the body.