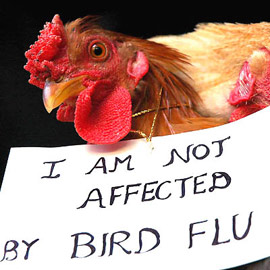 The department of animal husbandry, dairying and fisheries in its final report to the Office International des Epizooties (OIE) (World Organisation of Animal Health) on Friday has notified OIE on the regained status as an Avian Influenza-free country.
On February 18, India had notified the OIE of an outbreak of H5N1 in Navapur, Maharashtra and Uchchal, Gujarat.

The Government had compensated the poultry owners whose birds were killed in the culling operation.
High Security Disease Laboratory, Bhopal has tested nearly 67,000 samples since first outbreak in February 2006.

“Surveillance around the areas of outbreaks since completion of operation (including culling, disinfection and clean up) and surveillance in the rest of the country has shown no evidence of the presence of the Avian Influenza”, the release said.

Considering the global nature of the Avian Influenza, the Government has decided to continue the surveillance as a whole in the country.