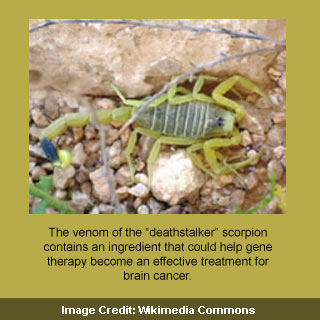 Scorpion venom seems to be dangerous but could also be useful in the health and medicine terrain. It may help in the treatment of cystic fibrosis and different forms of cancer. Investigators claim that the deathstalker scorpion has an ingredient in its venom which aids in making a gene therapy more effective for brain cancer treatment. This substance probably enables therapeutic genes to reach more brain cancer cells than present day approaches.

Genes known to treat disease are called therapeutic genes. The appropriate delivery of these genes into diseased cells may help fight against glioma, which is known to be one of the most common and serious form of brain cancer. Scientists mentioned that it is very difficult to make the genes invade cancer cells. Also substances employed for transporting such genes possibly have a number of side effects. These side-effects may be avoided by an ingredient found in the venom of a deathstalker scorpion. Chlorotoxin, the substance in deathstalker scorpion venom is apparently regarded as one of the key ingredient in the gene-delivery system along with nanoparticles of iron oxide.

Miqin Zhang and colleagues enlightened each nanoparticle to be about 1/50,000th the width of a human hair. For ascertaining the capability of venom-based nanoparticles, researchers conducted an experiment on lab mice. They were probably successful in showing that venom-based nanoparticles can almost double the amount of gene expression in brain cancer cells as compared to nanoparticles that lack the venom ingredient. The investigators believe this targeted gene delivery system to boost treatment outcome of gene therapy for glioma and other deadly cancers.

The research is published in a monthly journal ACS Nano.