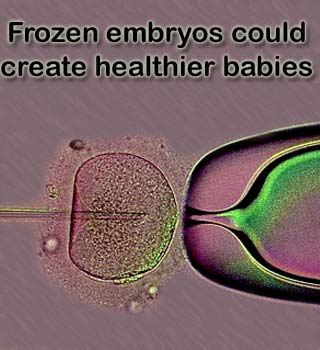 In Vitro Fertilisation (IVF) technique has proved to be quite a saver for infertile couples. It now appears that the advanced technology could do more than just producing babies. A novel study suggests that a procedure that screens IVF embryos may up the chances of having a healthy baby.

According to the researchers healthy babies could be born if embryos developed in the IVF technique are frozen before implanting them in the womb. IVF is a process in which eggs from a woman are removed and fertilized with sperm in the laboratory. After a couple of days, the embryos are implanted in the womb. Just in case the fresh cycle happens to fail, researchers maintain a backup of remaining frozen embryos.

“These findings are really quite interesting. It kind of defies logic to a certain extent, because the stimulation drugs and anaesthetics that are used in egg collection have worn off by the time fresh embryo transfers are done. It seems to be an issue with the formation of the placenta, but how it has an effect isn’t known. This may be a bit of biology that has escaped most people,” remarked Allan Pacey, of the University of Sheffield and British Fertility Society.

The results are backed by three separate studies that indicate that healthier babies are born after the embryos underwent frozen cycles. Experts reveal that in instances where fresh embryos are used women could face the strong after affects of drugs that are utilized to stimulate the ovaries which in turn produce eggs. This may harm the embryo growth on implantation in the womb.

A team of researchers from University of Pennsylvania in Philadelphia bring to light the fact that as against babies born of frozen embryos, those babies who were born after fresh cycles had 51% increased chances of being low weight at birth and were 15% more susceptible to mishaps including death.

While the Guidelines from the National Institute for health and Clinical Excellence recommend couples to include at least three fresh cycles with many frozen ones to increase chances of pregnancy and a healthy baby, data from the Human Fertilisation and Embryology Authority suggests women under the age of 35 with fresh embryos have 31% chances of being successful with conception compared to 20% on average for frozen embryos.

However NHS authorities mention that though chances of getting pregnant with fresh embryos may be more, it may bring along with it risks of having an unhealthy baby.

The research has been presented at the American Society of Reproductive Medicine conference in San Francisco.

Protein appears to be associated with troubles in executive thinking capabilities