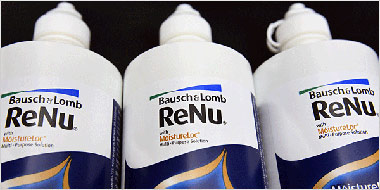 Federal disease control experts and leading eye doctors have formally concluded that ReNu with MoistureLoc from Bausch & Lomb was the only contact lens solution contributing to an outbreak of potentially blinding fungal eye infection earlier this year. But it still remains unclear how the product caused the problems.

The infections showed up in Asia last year and peaked in the U.S.A this spring shortly after Bausch withdrew MoitureLoc from the domestic market on April 13. Bausch & Lomb announced a worldwide recall a month later and caused the company’s stock and profit forecast to plunge.

Before the withdrawal, about 2.3 million of the nation’s 30 million soft lens wearers used MoistureLoc. The analysis did not say how many of the most seriously injured patients used MoistureLoc, but the product was used by a large majority of those reporting fungal infections.

Bausch & Lomb is now facing a series of lawsuits. The potential link between Bausch’s products and Fusarium infections was first reported in Asia last year when health authorities in Singapore and Hong Kong noticed a surge in infections among wearers of soft contact lenses.

Bausch eventually concluded that MoistureLoc’s formulation could create biofilms in some circumstances that would shield the fungus from the sterilizing agent in MoistureLoc. That could allow Fusarium to colonize a lens case or bottle cap, the company said.