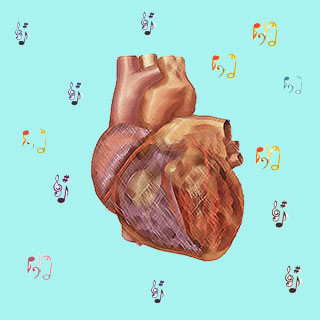 According to a new research by Italian researchers, music in future may become a therapeutic tool for blood pressure control and rehabilitation. It was noted that music may also be of great help in the synchronization of blood flow and respiratory rates.

Now, the experts are believed to have found that swelling music crescendos may induce moderate arousal while the decrescendos in music may induce relaxation.

“Music induces a continuous, dynamic — and to some extent predictable — change in the cardiovascular system. It is not only the emotion that creates the cardiovascular changes, but this study suggests that also the opposite might be possible, that cardiovascular changes may be the substrate for emotions, likely in a bi-directional way”, stated Luciano Bernardi, M.D., lead researcher and professor of Internal Medicine at Pavia University in Pavia, Italy.

It was noted that one may not be able to quickly realize the physiologic changes which apparently take place when listening to music. These autonomic changes are believed to be of optimum use for inducing body sensation. These sensations may create seamless stimulus that seemingly reach the upper brain or are likely to even reach the level of consciousness.

In addition to this, music interruption in the internal body physiology synchronization is said to strengthen the sharing sense within a human relationship. This seems to open new areas for music therapy in rehabilitative medicine and is likely to be utilized in pathologic conditions.

However as stated by the researchers, this evaluation seems to only include young subjects. The results of this research may probably be quite different if conducted on older subjects or on people who may be used to different kinds of music.

This research was published in an issue of the Circulation: Journal of the American Heart Association.