Scientists have developed a chewing gum containing friendly bacteria, which they say can help prevent tooth decay. The good bugs in the gum prevent other harmful mouth bacteria from sticking to and attacking the teeth. 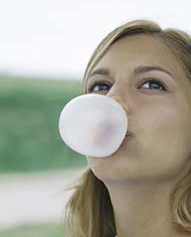 Another potential use of Lactobacillus includes the prevention of body odour. BASF are looking to produce a deodorant that can stop the odour-producing bacteria in the armpit.

The bacterium responsible for dental cavities, Streptococcus mutans, persistently colonises the surface of the teeth, where it converts sugar into aggressive acids that breaks down the enamel.

L anti-caries reduce the concentration of this harmful bacterium in the mouth making S mutans clump together, preventing them from adhering to the teeth.

The BASF scientists say that the gum has been tested on large numbers of people and has the ability to significantly reduce bacterial levels.

“The effectiveness has been demonstrated and the first oral hygiene products containing probiotic lactobacilli are scheduled to appear in 2007,” Dr Andreas Reindl of BASF was quoted by the BBC, as saying.
Dentists advise that the best way to keep your teeth in good condition is to ensure that you clean them regularly to get rid of any plaque build up.

It is also important to have a regular check up at the dentist- most suggest once every six months to a year. Dr Gordon Watkins, a member of the British Dental Association’s health and science committee, cautioned: “These new products will not remove the need to brush your teeth as their action is targeted against just one bacterium.”

Nanopump, a Disposable Insulin pump for Diabetics unveiled by Debiotech and...