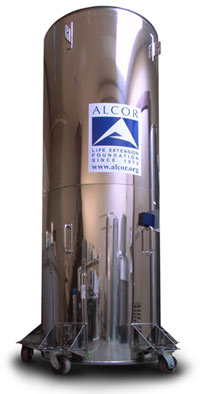 An Australian biologist has won approval from health authorities to build the region’s first cryonics centre for freezing people when they die in the hope of revival in the future. Philip Rhoades, 54, said that it was believed to be only the third such centre in the world, and that he and his family would be among the first to be frozen in minus 150 degrees C (minus 238 F) liquid nitrogen.

“My parents are both science types, like me, and with my siblings are interested in this great experiment,” Rhoades said.

“If I can eventually help other people whose lives should be longer, this would also be a good thing to do.”

Rhoades has already spent 650,000 dollars (490,000 US dollars) developing plans for underground storage at Cowra, about 200 kilometres (130 miles) west of Sydney. He hopes to start building on the 60 hectare site within six months.

Under the cryogenic process, bodies are drained of blood, pumped full of chemicals and stored in liquid nitrogen to preserve them in the hope that future medical advances will enable them to be brought back to life.

“Even just a few years ago it was considered fairly much fringe science, but now with the human genome project and gene therapy and things, people are starting to see pretty much anything is possible with enough research and time,” Rhoades said.

“There is risk involved, but the choice is permanent and irretrievable death right now or the alternative is a possible revival in the future.”

He said there was a need for a cryonics centre in Australia because religious fundamentalists could sabotage established operations in the United States or the US government might outlaw the process.

The Cryonics Association of Australia has 30 members, of whom 16 have signed up to be frozen at two centres in the US at a cost of up to 250,000 dollars, the paper said.

Rhoades said while his mother Dorothy, 74, a science teacher, and father Gerald, 79, an industrial chemist, were keen to be frozen, his girlfriend was not.

“So far she has not been interested, which is sad because I’d really miss her in the future,” Rhoades said.