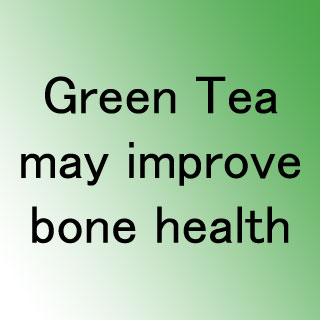 Green tea is said to be one of the most popular beverages which are consumed all over the world. It is apparently now also available as a nutritional supplement. A new study from Hong Kong has discovered new evidence that green tea may be useful for improving bone health. It was discovered that the tea supposedly contains a group of chemicals that may speed up bone formation and assist in slowing its breakdown.

The beverage may have the likelihood to aid in the prevention and treatment of osteoporosis and other bone diseases that may affect millions of people all over the world.

In this new study, Ping Chung Leung and colleagues observed that several scientific studies have associated tea to have many advantageous properties which may apparently help in averting cancer, heart disease, and other conditions. Some of the latest studies in humans and cell cultures may propose that tea could also benefit bone health. But a small number of scientific studies have apparently discovered the exact chemicals in tea that might be accountable for this effect.

The experts apparently exposed a group of cultured bone-forming cells i.e. osteoblasts to three chief green tea components which are epigallocatechin (EGC), gallocatechin (GC), and gallocatechin gallate (GCG) for quite a lot of days. It was discovered that one in particular, EGC, apparently enhanced the movement of a major enzyme that may encourage bone growth by up to 79 percent. EGC also notably enhanced levels of bone mineralization in the cells, which could strengthen the bones.

The experts also illustrated that high concentrations of ECG apparently obstructed the movement of a kind of cell i.e. osteoclast which may break down or weaken the bones. It was also seen that toxic effects was apparently not seen in the bone cells as green tea components supposedly did not cause them.

This finding is in the ACS’ Journal of Agricultural and Food Chemistry, a bi-weekly publication.