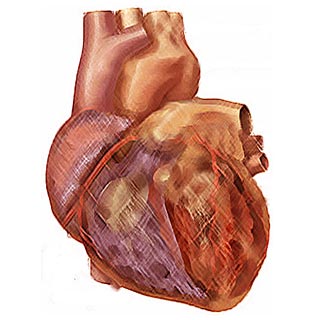 According to a latest research HIF1-alpha protein can apparently be made ineffective in order to prevent heart failure. This particular protein seems to aid abnormally enlarged heart cells in burning glucose. This research was conducted by Jaya Krishnan and other cell biologists at ETH Zurich.

Heart failure is likely to happen due to obesity or diabetes. The heart of obese people supposedly needs to put in greater effort to enable successful pumping of blood through the circulatory system. This may cause mass increase of the myocardial muscle cells which probably in turn leads to the enlargement of the heart.

Hypothetically, for the heart to enlarge there may be a dire need of greater oxygen and energy. But the myocardial muscle cells are stated to experience a lack of energy and oxygen until such time as there may be adequate blood vessels to support the tissue.

The cells seemingly change their metabolism during this crisis. While the healthy heart evidently burns the fat, the abnormally enlarged heart cells seem to burn instantly available glucose (form of sugar). This is probably done with the help of HIF1-alpha protein.

This protein probably also activates other genes besides aiding the modified metabolism. One such gene called PPARgamma is believed to aid production and storage of fat by the cardiac cells. Apparently, this may cause these cells to gradually become fatty and die. This cardiac disruption most probably causes fatal heart failure.

The researchers conducted the research with mice. They evidently found that the absence of PPARgamma gene in these mice may prevent heart failure as the HIF1-alpha protein seems to become ineffective. The absence of the corresponding gene seems to have the same effect on the mice with high blood pressure. The hearts of these mice suffering from high blood pressure do not seem to enlarge during pathological stress. They continue to burn fats and function like healthy hearts.

Jaya Krishnan and other cell biologists also seem to relate this phenomenon to diabetics. They have stated that some diabetic patients may be prescribed medicines with PPARgamma gene to probably help them respond better to insulin. However, this may increase their chances of heart failure.

Experts are apparently on their way to discover a new substance that may bind with the HIF1-alpha protein to block it. This research has been published in the online journal Cell Metabolism.