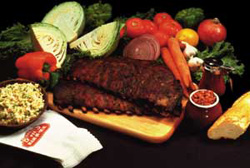 Scientists have found that marinating meats may help reduce unhealthy cholesterol compounds that form during cooking. Researchers in Taiwan found that marinades made with soy sauce or sugar inhibited the formation of cholesterol oxidation products (COPs) in pork and eggs as they cooked.

COPs are generated when cholesterol-rich foods are processed or heated, and research suggests that, in excess, the compounds may damage body cells and contribute to ills such as heart disease or cancer.

To study the effects of marinades on COP formation, Dr. Bing-Huei Chen and colleagues at Fu Jen University in Taipei soaked ground pork and hard-boiled eggs in marinades containing soy sauce, sugar or both. The only other ingredient in each marinade was water.

In general, the researchers found, all of the marinades cut COP formation during cooking, with sugar being particularly effective.
Marinating may create the benefit, Chen said, by generating so-called “browning reaction products.” These substances are thought to act as antioxidants, which mean they help neutralize COPs and similar molecules that can damage body cells.
It’s also possible, Chen added, that healthful nutrients in soy sauce, such as isoflavones, help quash COP formation.

Whether other types of marinades have such anti-COP abilities is unknown, according to the researcher. The simple sugar-soy sauce marinade, Chen noted, was only 1 percent soy sauce and 10 percent sugar, so it would add few calories and little salt to a health-conscious cookout.