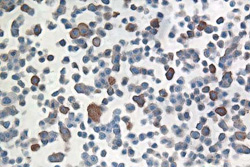 Experts involved in the development of a next generation of cancer-combating drugs claim to have created a major advancement with their latest results.

A new class of drugs – being developed by a major pharmaceutical company – targets an enzyme that helps cells divide; in cancer, this enzyme, called Aurora B, goes into overdrive, probably leading to uncontrolled and abnormal cell divisions.

The University of Manchester team has been studying a chemical that blocks, or hinders, the catalytic actions of Aurora B and has proven very effective at killing cancer cells in cultures grown in the laboratory.

Dr Stephen Taylor, the scientist leading the research in Manchester’s Faculty of Life Sciences said, “The first compounds were designed to inhibit a related enzyme called Aurora A.”

“But our research has shown that inhibiting Aurora B is a far more successful method of killing cancer cells and we have been strongly encouraged by these latest results.”

The research – published in the Journal of Cell Science – will be of interest to scientists around the world looking at Aurora inhibitors; there are currently more than 10 companies pursuing Aurora cancer programmes.

“Auroras have attracted worldwide attention but no one has been entirely sure which strategy to follow,” said Dr Taylor.

“Our paper clearly demonstrates that targeting Aurora B is a highly attractive avenue to pursue, although inhibition of Aurora A may still have some merits as a potential therapy.”

Early clinical trials of the Aurora-B drug’s toxicity have also been encouraging, with no major adverse effects to patients being reported. The next stage of trials to test its effectiveness is likely to start shortly.

“A lot of current cancer drugs, while effective, are also toxic; by contrast, the toxic effects of Aurora inhibitors has been relatively mild and so could provide a revolutionary new way to treat cancer in the future.”

Aurora A and B are a type of enzyme known as protein kinases; they modify other proteins by chemically adding phosphate groups to them. In cancer, both these protein kinases are ‘overexpressed’.

The University of Manchester team has been working on the Aurora B inhibitor in collaboration with pharmaceutical company AstraZeneca. The group published an earlier paper in 2003 that focused on the potential success of targeting Aurora B. These latest findings further strengthen the team’s belief that Aurora B inhibition is the preferred method to a successful cancer therapy.