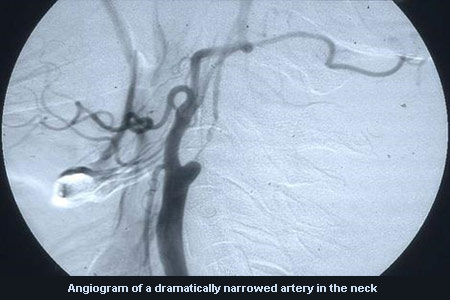 Those with narrowed arteries in the neck may be subjected to carotid surgery. A recent study commenced by the University of Oxford claims that successful carotid surgery decreases the risk of stroke over a 10-year period. It was mentioned that operating on the main arteries which supply blood to the brain apparently involves a 3% risk of causing an immediate stroke.

The operation known as carotid endarterectomy (CEA) possibly helps in removing fatty deposits that narrow the artery. But this procedure itself shares a demerit of triggering an immediate risk of stroke or death. The investigators conducted a randomized trial to examine benefits of successful CEA procedures in declining chances of a stroke over the next 5 or 10 years. It was ascertained that when surgical risks continue to remain low, patients under the age of 75 years receive good health. In older patients it was observed that the immediate risk of surgery was higher than long-term benefit.

Professor Alison Halliday of the Nuffield Department of Surgical Sciences and Professor Sir Richard Peto of the Clinical Trial Service Unit at the University of Oxford and the lead investigator, enrolled 3120 patients with narrowed carotid arteries in the neck. These patients were not sure if they could undergo a surgery. Experts randomly assigned half the patients to go through operation and the other half to have an indefinite deferral of the procedure until there was a definite need for it. The outcome was that in those who had surgery, risk of stroke or death during or soon after the procedure was 3%.

Those who underwent surgery reported a significant decline in their risk of stroke. After a period of 5 years, it was noted that stroke risk among those who had surgery immediately was 4.1 percent. And those who were not subjected to surgery faced a 10 percent risk of a stroke. On completion of 10 years, the risk among those who had surgery was 10.8 percent and in those without surgery developed a 16.9 percent risk. Researchers will be initiating further investigations for determining if the immediate risk of having such a surgery should be taken or no.

The study was published in medical journal The Lancet.