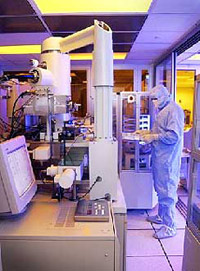 Doctors may soon be able to track individual donor cells after a transplant, thanks to a new technology, still in the study stage, and allows for the imaging and quantification of molecules within individual mammalian or bacterial cells. Claude Lechene and his colleagues describe the development of multi-isotope imaging mass spectrometry (MIMS), which has applications in all fields of biology and biomedical research. It could also be used to find out where and how much of a cancer treatment drug there is within a cell.

Claude Lechene of Harvard Medical School and Brigham and Women’s Hospital in the U.S, worked with colleagues from around the world to develop and test the new methodology.

“This method allows us to see what has never been seen before, and to measure what has never before been measured,” Lechene says. “Imagine looking into a building, slice by slice. You can see not only that it contains apartments, but also that each apartment contains a refrigerator. You can see that there are tomatoes in the refrigerator of one apartment, and potatoes in the refrigerator of another. You can count how many there are and measure how fast they are used and replaced. It is this level of resolution and quantification that MIMS makes possible within cells.”

A beam of ions is used to bombard the surface atoms of the biological sample and a fraction of the atoms are emitted and ionized. These “secondary ions” can then be manipulated with ion optics – in the way lenses and prisms manipulate visible light – to create an atomic mass image of the sample. Lechene and his colleagues developed MIMS by combining the use of a novel secondary-ion mass spectrometer developed by Georges Slodzian, from the University Paris-Sud in France.

MIMS can generate quantitative, three-dimensional images of proteins, DNA, RNA, sugar and fatty acids at a sub cellular level in tissue sections or cells. “Using MIMS, we can image and quantify the fate of these molecules when they go into cells, where they go, and how quickly they are replaced,” says Lechene.

The method does not need staining or use of radioactive labeling. Instead, it is possible to use stable isotopes to track molecules. For example, researchers could track stem cells by labeling DNA with 15N. “These stable isotopes do not alter the DNA and are not toxic to people; with MIMS and stable isotope labeling we could track these cells, where they are and how they have changed several years later,” says Lechene.

“The most significant feature of this technique is that it opens up a whole new world of imaging; we haven’t yet imagined all that we can do with it,” says Peter Gillespie from the Oregon Health and Science University in Portland, USA.