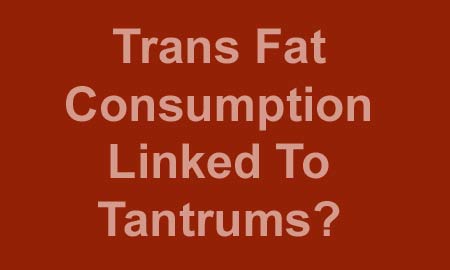 The next time someone turns aggressive, we can safely blame it on their taste buds if we intend to go by this tidbit. A study by professionals at UC San Diego has shown that consumption of dietary trans fat could be linked to tantrums and aggression.

The trial constituted nearly 1,000 men and women to gauge the association between trans fatty acids (dTFAs) and mood changes. Variables like past aggression, impatience, fight tactics and others were taken note of. Factors like age, education, alcohol and tobacco intake were controlled in the analysis.

“We found that greater trans fatty acids were significantly associated with greater aggression, and were more consistently predictive of aggression and irritability, across the measures tested, than the other known aggression predictors that were assessed,” cited Beatrice Golomb, MD, PhD, associate professor in the UC San Diego Department of Medicine.

The outcomes showed that individuals consuming more trans fats seemingly exhibited higher rates of aggression and irritability. The scientists added that it is essential to find out if the link between aggression and trans fats is causal. If yes, then individuals generally manifesting aggressive behaviors may be recommended to control their consumption of trans-fat foods.

Even lunch programs in school and programs could include a restriction on the inclusion of trans fat in the meals. This is precisely because the effects of aggression influence other people too apart from the person displaying such attitudes.

The report is published in the journal, PLoS One.