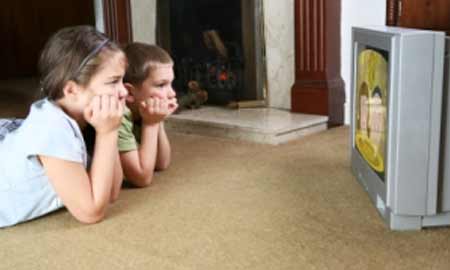 It’s rather obvious that couch potatoes are likely to gain weight and a study by scientists at University of Montreal shows that it apparently holds good for children. The professionals claimed that each hour of watching TV may lead to increase in waist size by age 4.

This effect seemed to affect the concerned kids’ ability to perform in sports and other physical activities as well. As part of the trial, nearly 1,314 kids aged between 2.5 and 4.5 years were inspected. Guardians reported the children’s television watching habits during the week and in weekends. About 15% of them already seemed to be watching TV for more than 18 hours each week.

“Across the occidental world, there have been dramatic increases in unhealthy weight for both children and adults in recent decades. Our standard of living has also changed in favor of more easily prepared, calorie-dense foods and sedentary practices,” commented senior author Dr. Linda Pagani.

The estimations showed that an additional hour of TV per week seemingly added half a millimeter of fat on the respective volunteers’ waist sizes. This effect further increased among those who saw excess TV while they were 2.5 years old.

In other words, 4.5-year old kids who watched 18 hours of television were likely to experience an extra 7.6mm rise in their waist circumferences by age 10. Reported in the International Journal of Behavioral Nutrition and Physical Activity, the study basically put forth the importance of physical activity as opposed to sedentary behaviors like watching TV or surfing the net.

We do remember the study published in the American Journal of Play that showed how less outdoor playing time could lead to depression or suicidal tendencies in kids.