Within the next five years, patients who are paralyzed from the neck down, will soon be able to feed themselves using their hands and arms, an expert , John Donoghue has predicted. John Donoghue, of Brown University in Rhode Island is acting as the pioneer in order to make this brilliant technology available. 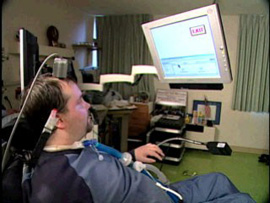 Brain implants that allow quadriplegics to move computer cursors with the power of thought will soon be capable of stimulating patients own muscle, giving them enough control to grasp and manipulate a spoon.

Initially, the range of movement will be limited, but this technology has the potential to tranform the lives of people with spinal cord injuries and who rely on others to feed, wash and dress them.

“They are not going to be writing or piano-playing, but it is a first step to proving a physical connection can be made from the brain to the muscles,” Donoghue said.

Donoghue’s team has had astounding success with a device called BrainGate, an aspirin-sized implant that records electric signals from the part of the brain that processes movement in the limbs. In fact, Matt Nagle, 25 from Massuchusetts learnt in just nine months to use it to move a cursor, open e-mails, play computer games and even operate a single robotic arm.

Donoghue is now researching ways to refine BrainGate’s software to give patients finer control, and of linking it to an existing technology, functional electrical stimulation (FES), that is capable of moving paralyzed muscles.