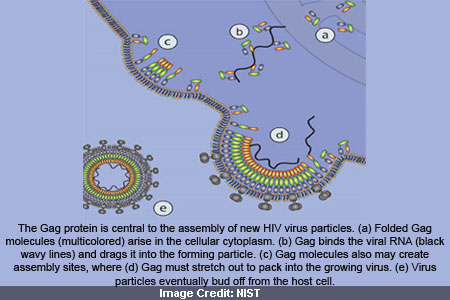 Fighting a disease like human immunodeficiency virus (HIV) may not be easy, especially with inappropriate treatment available at hand. Understanding this infection can possibly help in gauging means of treating this deadly disease. Experts from the National Institute of Standards and Technology (NIST) have apparently developed a method through which novel insights into the HIV infection process triggering acquired immunodeficiency syndrome (AIDS) can be observed.

Throughout the investigation, researchers scrutinized a probably crucial protein molecule’s behavior. The HIV protein Gag possibly plays several vital roles during the assembly of the HIV in a host cell. Claimed to be a microscopic gymnast, the Gag molecule twists itself in various different shapes inside a host cell. A piece of HIV genetic material is supposedly dragged toward the cell membrane with the help of a shape, or conformation. It is in the cell membrane that the viral particles presumably grow.

Hirsh Nanda, a postdoctoral researcher at the NIST Center for Neutron Research (NCNR) and a member of the multi-institutional research team, said, “A better understanding of Gag’s behavior might allow researchers to develop antiviral drugs that target the HIV assembly process, which remains unassailed by medical science. Our method might reveal how to inhibit new viruses as they grow.”

In this region the Gag’s opposite end appears anchored, stretching the protein into a rod-like conformation to ultimately form a barrier surrounding the infectious genes in the finished virus. In order to conduct the research, investigators developed an artificial cell membrane wherein Gag can supposedly express its gymnastic prowess for the neutron probes. Various stages of the virus’s development were imitated for observing the role of Gag. During assembly experts claim to have noted important interactions between Gag and the cell. The research findings can further enable scientists to evaluate large classes of membrane proteins, similar to Gag.