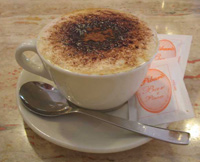 People who regularly drink coffee may face a lower risk of developing diabetes than those who do not, a new study says.

Besa Smith and colleagues at the University of California studied 910 adults for an average of eight years after an assessment of their coffee drinking habits.

The average age of the participants was 66 and 41 percent of them were men.

After adjusting for other known diabetes risk factors, the researchers concluded that both past and current drinkers of caffeinated coffee had about a 60 percent reduction in diabetes risk, compared with participants who never drank coffee.

A similar reduction in risk was seen among the roughly one-third of participants with impaired glucose tolerance.

Scientists, however, said it was premature to recommend coffee drinking as a public health strategy for lowering the risk of diabetes.

“The next step is to pinpoint the compounds in coffee responsible for this protective effect,” said Smith.

This study is not the first to find that coffee drinkers have an edge in terms of protection from diabetes.

But researchers said the study was unique as it included people at high risk for type two diabetes whose blood sugar levels were higher than normal.