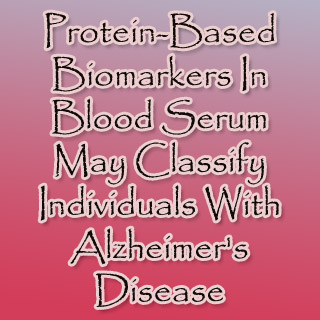 Alzheimer’s disease is difficult to treat and recognizing it within the early stages itself may be beneficial for better diagnosis. A latest study reveals that biomarkers in blood serum allow diagnosing the illness prior to its progression. Since there seems to be a strong requirement for reliable and valid diagnostic and prognostic biomarkers of Alzheimer’s disease, study findings can open doors to improved treatments.

It was believed that due to significant advantages, the ideal biomarkers would be accumulated from peripheral blood. Investigators presume that determining biomarkers in the blood has several advantages over other methods of classifying patients with Alzheimer’s disease. Some of these methods may include detecting biomarkers in the cerebrospinal fluid and neuroimaging. A simple blood test seems to be a much better option for most people against lumbar punctures through which cerebrospinal fluid is obtained. Since older patients may be unable to go through lumbar puncture, they can be subjected to neuroimaging because of pacemakers or other health issues.

Authors quote, “In addition to offering more accessible, rapid and cost- and time-effective methods for assessment, biomarkers (or panels of biomarkers) also hold great potential for the identification of endophenotypes within Alzheimer’s disease populations that are associated with particular disease mechanisms. In the current study, a disproportionate number of inflammatory and vascular markers were weighted most heavily in the analyses.”

Investigators examined proteins in the serum of 197 patients who were suffering from Alzheimer’s disease and 203 controls without the disorder. Sid E. O’Bryant, Ph.D., of Texas Tech University Health Sciences Center, Lubbock, and colleagues in the Texas Alzheimer’s Research Consortium used statistical analyses for producing a biomarker risk score. This score comprised levels of a number of protein biomarkers, including fibrinogen which is a clotting protein, interleukin-10 that is linked with the immune system and C-reactive protein i.e., an inflammatory marker.

Scientists add, “The identification of blood-based biomarker profiles with good diagnostic accuracy would have a profound impact worldwide and requires further validation. Additionally, the identification of pathway-specific endophenotypes among patients with Alzheimer’s disease would likewise have implications for targeted therapeutics as well as understanding differential progression among diagnosed cases. With the rapidly evolving technology and the analytic techniques available, Alzheimer’s disease researchers now have the tools to simultaneously analyze exponentially more information from a host of modalities, which is likely going to be necessary to understand this very complex disease.”

The study is published in the September issue of Archives of Neurology, one of the JAMA/Archives journals.