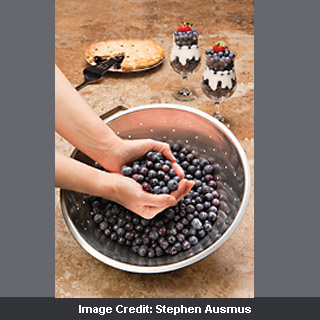 Blueberry not only protects against hepatitis C, but also fights obesity and diabetes. And now an investigation from the U.S. Department of Agriculture (USDA) chemist Wallace H. Yokoyama asserts that this fruit considerably reduces cholesterol. The research findings seem to have great significance in the world of health and medicine.

During the research, some laboratory hamsters were fed rations spiked with blueberry peels and other blueberry-juice-processing leftovers. Such hamsters reportedly had better cholesterol health than those whose rations weren’t enhanced with blueberries. Blueberry-enhanced rations allegedly had 22 to 27 percent lower total plasma cholesterol than hamsters fed rations that didn’t contain blueberry juice byproducts.

Levels of very low density lipoprotein (VLDL) appeared almost 44 percent lower in the blueberry-fed hamsters. There is possibility that berry compound or compounds activate liver genes that are known to either produce or use cholesterol.

The research is published in the May/June 2011 issue of Agricultural Research magazine.