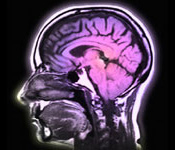 Scientists at the University of Liverpool have created a new chemical compound that could just be developed as a drug treatment for Alzheimer’s disease. The researchers have used a family of long chain sugars called Heparan Sulphates (HS), which is found on nearly every cell of the body to produce a new compound that can prevent the formation of clumps of small proteins that form in the brain.

These protein clumps or plaques disrupt the normal function of cells leading to progressive memory loss which is the main characteristic of Alzheimer’s disease.

The clumps are formed from a small protein fragment called Amyloid-beta (A-beta) peptide released from its ‘parent’ protein – amyloid precursor protein (APP). This process requires the action of an enzyme called beta-secetase (BACE), which is critical in clipping up the APP to form the smaller A-beta fragments.

Professor Jerry Turnbull and Dr Ed Yates, from the University’s School of Biological Sciences, have discovered that the HS sugars may play a key role in limiting the development of Alzheimer’s disease. The sugars stick to the BACE enzyme and reduce its ability to ‘clip’ the A-beta peptide, thus controlling the amount of A-beta peptide available to form damaging plaques in brain tissue.

Professor Turnbull said: “We have developed a new class of compounds called ‘engineered heparins’ that could possibly be developed into drugs to stop A-beta peptides in the brain from forming and for the first time treat the underlying cause of Alzheimer’s. The compound, based on the blood thinning drug, heparin, has modified chemical structures designed to optimise their desired activities and reduce potential side effects.

“The compounds work by blocking the beta-secretase enzyme, responsible for snipping proteins into smaller fragments. Despite its central importance to the disease, there are currently no drug treatments which target this enzyme because it has proved difficult to find inhibitors using traditional drug discovery approaches. The new compounds, based on the body’s natural substances, may provide a novel route to effective treatments for this debilitating disease.”