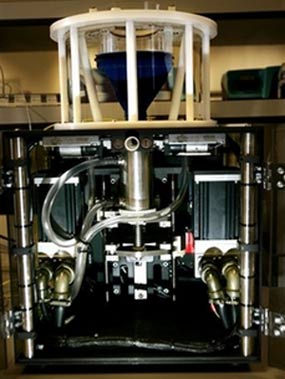 British scientists have built what they say is the world’s first artificial stomach- a shiny, high-tech box that physically simulates human digestion. The artificial stomach has been constructed from sophisticated plastics and metals that are able to withstand the corrosive acids and enzymes found in the human gut.

Wickham’s patented artificial gut is a two-part model that is slightly larger than a desktop computer. The top half consists of a funnel in which food, stomach acids and digestive enzymes are mixed. Once this hydration process is finished, the food gets ground down in a silver metal tube encased in a dark, transparent box.

Software sets the parameters of the artificial gut — how long food remains in a particular part of the stomach, predicted hormone responses at various stages, and whether it is an infant or adult gut.

Dr. Martin Wickham of Norwich’s Institute of Food Research, the artificial gut’s chief designer said, “There have been lots of jam-jar models of digestion before,” referring to the beakers of enzymes typically used to approximate the chemical reactions in the stomach.

With a capacity about half the size of an actual stomach, the artificial gut can “eat” roughly 24 ounces of food. To date, the most substantial meal it’s enjoyed is vegetable soup.

“It’s so realistic that it can even vomit,” adds Wickham.

The device may ultimately help in the development of super-nutrients, such as obesity-fighting foods that could fool the stomach into thinking it is full.

One company wants to use it to test whether a biscuit can release a specific nutrient in the small intestine. Another group wants to determine if soil contaminants, which could potentially be swallowed by children playing outside, get absorbed by the human body.