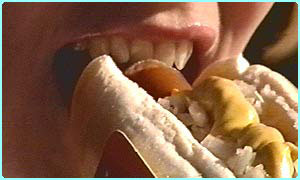 One of the biggest tip any dietician always gives to their patient is to ‘eat slowly’ in order to decrease the intake of food. However, till date there has been no scientific evidence backing this theory.

Kathleen Melanson, assistant professor of nutrition and food science at the University of Rhode Island said, “It started in about 1972 as a hypothesis that eating slowly would allow the body time for the development of satiety [fullness] and we would eat less. Since then we’ve heard it everywhere and it has become common knowledge. But no studies had been conducted to prove it.”

In fact, early evidence suggested the opposite to be true. In the 1990s, one study studied the role of small bite sizes and found no effects, while a study of pauses between bites actually showed increased food consumption with more pauses.

However a laboratory study of college-age women over the past year led by Melanson confirmed the long-held common belief. The results were reported in October by research intern Ana Andrade at the annual meeting of the North American Association for the Study of Obesity.

In the study conducted, 30 women made two visits to Melanson’s lab, and each time they were given a large plate of pasta and told to eat as much as they wanted. When they were told to eat quickly, they consumed 646 calories in nine minutes, on the other hand when they were encouraged to pause between bites and chew each mouthful 15 to 20 times, they ate just 579 calories in 29 minutes.

“Satiety signals clearly need time to develop,” Melanson noted. “Not only did the women take in fewer calories when they ate more slowly, they had a greater feeling of satiety at meal completion and 60 minutes afterwards, which strongly suggests benefits to eating more slowly.”

Melanson further added that the women also claimed to have enjoyed the meal more when they ate slowly than when they ate quickly.

One potentially perplexing factor in the study was that the volunteers were given water to drink with their meal, and when eating slowly they had considerably more time to drink before completing their meal. The greater consumption of water might have contributed to satiety under the slow condition. However, Melanson said that this factor reflects the real-world situation, since eating slowly allows more time for water consumption. She will conduct follow-up studies next spring that factor in water consumption as well as the consumption of higher calorie beverages like soft drinks or juices.

Additional studies will be conducted in 2007 to determine if there are different results for other groups of individuals. Melanson also plans to study “the physiological signals that suppress hunger or enhance satiety to see if there is a mechanistic explanation for our results.”