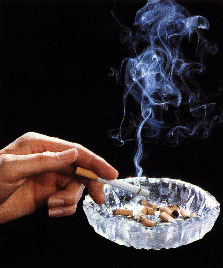 A new-long term study published in the American Journal of Respiratory and Critical Care Medicine states that passive smoking does lead to respiratory troubles in healthy adults.

The conclusion as drawn by Dr. Margaret W. Gerbase of the Division of Pulmonary Medicine at the University Hospitals of Geneva, Switzerland, and her 11 associates who assessed the respiratory symptoms in 1,661 never-smokers over an 11-year period.

All individuals in the study group had participated in a Swiss Study on Air Pollution and Lung Diseases in Adults in 1991, and once again in 2002. The two-part study was the first large-scale investigation of the long-term health effects of moderate ambient air pollution in Switzerland.

The researchers found that constant exposure to environmental tobacco smoke (ETS) to be strongly associated with the development of cough.

In subjects with bronchial hyper-reactivity, they observed a link between ETS and symptoms like wheeze, cough, dyspnea (shortness of breath) and chronic bronchitis.

However, the condition that had the strongest association with ETS was dyspnea.

The authors of the study say that if steadily exposed to ETS, individuals with bronchial hyper-reactivity are most likely to develop early-onset chronic respiratory disease.

Excluded from participation in the 1991 study were all potential participants who reported such symptoms as wheeze, cough, phlegm, dyspnea and chronic bronchitis, or who were taking a medication for asthma at the time.

The researchers concluded that their findings support the need for policies protecting all non-smokers from the “detrimental effects” of ETS.

Position of foot while walking or running seemingly linked to ankle...