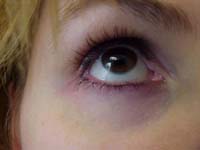 You may have an hour glass figure, a lovely height, and long tresses but those ugly dark circles under your eyes take it all away. Ever wondered why. Here’s the answer.

According to Britain’s leading nutritionist Jane Clarke, dark rings around eyes can be caused by iron deficiency.

Anaemia is a sign that not enough oxygen is getting to the body tissues. There are several types of anaemia, but iron deficiency is the most common.

This can be treated easily in many cases by eating right food, the online edition of Daily Mail quoted Clarke as saying.

“Our bodies need iron to manufacture haemoglobin, the red pigment which carries oxygen to the cells. Dark circles alone do not indicate anaemia,” he said.

“It’s something that generally affects women more than men – partly because of the menstrual cycle.”

The best sources of iron include liver (although it is not recommended during pregnancy), lean red meat including venison, egg yolks, dried and tinned beans including baked beans, lentils and chickpeas.

The secret is to eat Vitamin C rich foods in the same meal – this means vegetables that are as fresh and as lightly cooked as possible, especially peppers, kale, sprouts, cabbage and broccoli, and fruits such as kiwis, blueberries, blackcurrants, papaya, oranges and mangoes.

However those who have these dark rings for years, the cause could be age rather than diet. “As we get older our skin becomes thinner. To some degree this process is controlled by our genes and family patterns, but it’s also influenced by things that damage the skin such as smoking,” Clarke said.