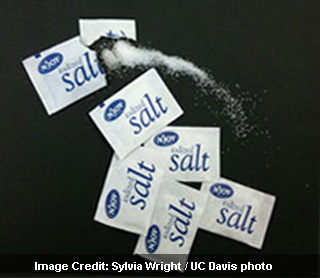 Did you know that we humans naturally regulate the salt intake in our body? Well this is what researchers from the Department of Nutrition at the University of California, Davis, and the Department of Anatomy and Neurobiology at Washington University claim. They allege to have discovered powerful proof that humans naturally adjust their salt consumption within a closely definite physiologic variety.

This new research, ‘Can Sodium Intake Be Modified by Public Policy,’ is appropriate as two proficient panels assembled by the U.S. government are bearing in mind nutrition policies that could lower present sodium intake suggestions and initiate policies adjusting the quantity in food. This research apparently confronts the significance of authoritarian or government involvement by identifying facts, which ought to be taken into account as U.S. guidelines are being reevaluated, and even more restraining rules considered.

“If sodium intake is physiologically determined, then our national nutrition guidelines and policies must reflect that reality. It is unrealistic to attempt to regulate America’s sodium consumption through public policy when it appears that our bodies naturally dictate how much sodium we consume to maintain a physiologically set normal range. To do otherwise will expend valuable national and personal resources against unachievable goals, ”commented,Lead researcher, David A. McCarron, an adjunct professor with the Department of Nutrition at UC Davis.

The scientists assessed 24-hour urinary sodium flow, the normal measure of everyday sodium consumption, from about 19,151 people which were gathered in roughly 62 formerly published surveys from 33 countries all over the world. In comparison to the usually held view that salt consumption has reached severe levels in Western societies, the examination apparently points out that everyday sodium intake across a broad range of ‘food environments’ is within a comparatively constricted range i.e. 117 mmol–212 mmol which is 2,700–4,900 mg.

Additionally, preceding researches supposedly offer helpful proof that adult humans naturally hunt for this range of sodium consumption. The researchers emphasize on neuroscience research in animal models signifying that sodium intake is said to be firmly restricted by significant pathways in the brain to preserve optimal function of various physiologic functions.

The UC Davis investigators statistically evaluated government-sponsored surveys of 24-hour urinary sodium excretion in 13 locations in the United Kingdom and Ireland apparently involving more than about 6,000 participants since 1982. This assessment apparently signifies that there has been no alteration during the past 25 years in the dietary sodium intake of people living in U.K. and Ireland.

The 2010 Dietary Guidelines Advisory Committee and an Institute of Medicine (IOM) Panel on Strategies to Reduce Sodium Intake are working to verify what the 2010 sodium intake guideline could be and how to execute plans, counting authoritarian and governmental measures, to further lower Americans’ sodium consumption.

Research co-author Judith Stern, professor of nutrition at UC Davis and a past member of the 1985 Dietary Guidelines Advisory Committee, mentioned, “If this body of evidence is not taken into account, updates to the Dietary Guidelines or regulatory actions are based on partial science. Clearly, before dietary sodium intake can or should be modified, additional discussion and analysis are required.”

The present everyday guidelines state that a maximum daily salt intake is around 2,300mg of sodium which is apparently equal to one teaspoon of table salt. These suggestions are supposedly already lesser than the lowest level of universal salt intake i.e. 2,700 mg and around 38 percent lesser than the global average sodium consumption i.e. 3,700 mg.

The research was published in the Clinical Journal of the American Society of Nephrology (CJASN).

Are you silently suffering from Silent Stroke?