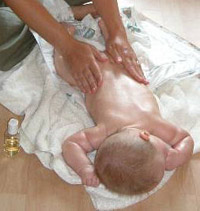 If you were getting mad and worked up with your babies’ constant crankiness and fussiness, here’s a solution.

Infant massage has been used since years in many Asian and African cultures to ease babies’ colic and fussiness, help them sleep, and even aid their growth and development. The interest in infant massage among parents in Western countries is growing in the recent years.

To go deeper into the science behind the practice, UK researchers analyzed 23 clinical trials in which infants younger than 6 months were randomly assigned to receive massage or not.

Researchers, led by Angela Underdown of the University of Warwick in Coventry, England claimed that with this clear hormonal effect, it’s “not surprising” that massage seemed to improve sleep and crying.

On the other hand, the nine studies showed no benefits for infants’ growth and development. And the researchers considered the rest of the 23 trials to have a “high risk of bias” because of concerns about their methodology; some reports, for instance, lacked information about how the study was designed and conducted.

Overall, the results offer “tentative support” for teaching parents and caregivers infant massage, though there’s not enough evidence to universally recommend the practice, the investigators note in the latest issue of The Cochrane Library, a publication of the Cochrane Collaboration, an international organization that evaluates medical research.

The trials included in the review were carried out in China, North America, Great Britain and Israel, and included 598 healthy, full-term infants. In some studies, researchers provided the massage, while parents did in others. Most looked at the effects of daily massage over a period of weeks.

Specific details such as when, how often and for long should the babies be massaged to get maximum benefits, have yet not been ascertained Underdown and her colleagues recommend that future studies examine these questions.