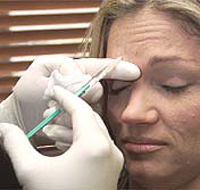 If you thought that a botox jab was the best way to smooth those fine lines on your face and of course to cover up your actual age, then think again. Doctors have issued a warning about the dangers of using excessively high doses of the potentially fatal toxin botox, in cosmetic treatments.

Physicians and patients must be aware of the hazards associated with illegitimate use of unlicensed botulinum toxin products. Left untreated, it may result in respiratory failure and death.

The Journal of the American Medical Association reports four cases where patients were given doses many times higher than the estimated lethal dose. The treatments were given using toxins intended for laboratory use.

In the four cases reported to the Centers for Disease Control and Prevention (CDC), in Atlanta, the patients were found to have been injected with a highly concentrated, unlicensed preparation of botulinum toxin A.

Tests prior to treatment showed three out of the four had blood serum toxin levels equivalent to 21 to 43 times the estimated lethal dose. Data for the fourth patient was not available.

The researchers say the patients did not die because they received prompt hospital treatment.

The team, led by Daniel Chertow, said: “Physicians and patients must be aware of the hazards associated with illegitimate use of unlicensed botulinum toxin products. Only licensed products should be used clinically.”

In the UK, an expert working group submitted a report to the government in January last year calling for powers to regulate the cosmetic treatment industry, including who should be able to give botox treatments.