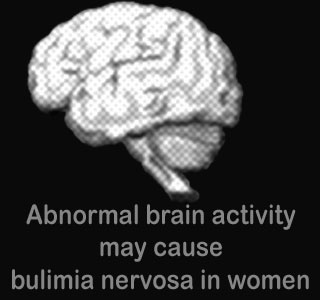 A latest study states that during psychological testing, bulimia nervosa women react more impulsively than the one’s without eating disorders. Evidently their brain scan also reveals the variance in the behavior controlling areas.

The article’s background information reveals that bulimia nervosa usually commences in the period of adolescence or young adult years.

The authors state that the frontostriatal circuits, pathways between nerve cells, aid the individual in voluntary behavior control. These functions of the participants are tested through their performance in the Simon Spatial Incompatibility task. While performing the tasks, the participants were scanned with functional MRI. The participants were asked to imply the direction of an arrow irrespective of its position on the screen.

The participants evidently found it easier to indicate the arrow direction when it was in alignment with the screen position. For instance a left pointing arrow may appear on the right side of the screen. The act of only focusing on the arrow direction requires regulating behavior. The person has to go against their natural tendency to respond automatically and determine the conflicting messages.

Rachel Marsh, PhD and colleagues at Columbia University, and the New York State Psychiatric Institute, New York, evaluated the test performance of around 20 bulimia nervosa women with a control group of 20 healthy women.

The authors state that, “Patients with bulimia nervosa exhibited greater impulsivity than did control participants, responding faster and making more errors on conflict trials (where the arrow direction and location did not match) that required self-regulatory control to respond correctly. They responded faster on congruent trials following incorrect conflict trials, suggesting impulsive responding even immediately after having committed an error.”

They conclude that, “These group differences in performance and patterns of brain activity suggest that individuals with bulimia nervosa do not activate frontostriatal circuits appropriately, perhaps contributing to impulsive responses to conflict stimuli that normally require both frontostriatal activation and the exercise of self-regulatory control to generate a correct response. We speculate that this inability to engage frontostriatal systems also contributes to their inability to regulate binge-type eating and other impulsive behaviors.”

It was apparently noticed that on correct recognition of the arrow direction, the brain activity in bulimia nervosa women did not activate at a level similar to the women in the control group.

It’s stated that further detailed studies need to be conducted on the issue. Evidently even impulsive people having a healthy weight and eating behavioral pattern should be included in further studies. Adolescents nearing the period when bulimia nervosa develops and also patients with a variety of symptoms should be a part of future studies.