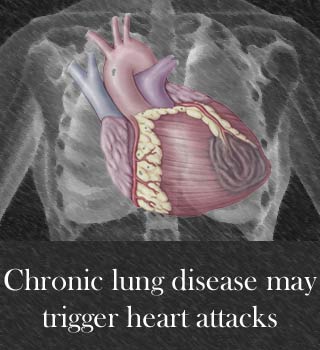 A novel research by experts at the University of Nottingham brings to light some rather disturbing news. The research reveals that individuals with a certain lung disease are at a three fold risk of suffering from serious coronary conditions including heart attacks.

According to Richard B Hubbard, co-author of the study there appears to be a significant association between a fatal lung disease called idiopathic pulmonary fibrosis (IPF) and heart attack. The researchers found that IPF may actually trigger heart attacks. The lung disorder is characterized by progressive scarring (fibrosis) and deterioration of the lungs.

Professor Richard commented, “If you look at them over time, people with IPF have roughly a three-fold increased risk of acute coronary syndrome, which is a greater increase than you get from smoking. We know that genetic factors play some role in IPF because it clusters in families in about 10 percent of cases.”

For the research, the team closely analysed data obtained from records of the Britain’s Health Improvement Network. It comprised of 920 patients with IPF and 3,593 control subjects without IPF for diagnoses of coronary events and disease incidence. Interestingly the study showed that patients with IPF had three times increased chances of experiencing a cardiac arrest.

In addition individuals suffering from the chronic lung problem had a 23% chance of having angina along with a 60% higher risk of suffering a stroke as against their normal counterparts. These victims were also two times more likely to have been prescribed amiodarone compared to control subjects. The medication is administered for irregular heartbeats that could also be a cause of fibrotic lung disease.

As medical knowledge about IPF is limited, the study should hopefully get doctors alert along with the thousands suffering from IPF.

The December issue of American Journal of Respiratory and Critical Care Medicine has published this study.