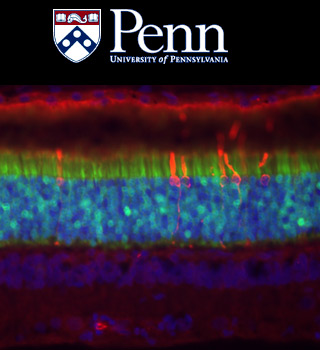 The safe and successful use of a viral vector, or missile in targeting a class of photoreceptors of the retina called rods was conducted by scientists at the University of Pennsylvania. In case of inherited blindness caused by rod degeneration it seems to be the former step in developing gene therapies.

The experiment apparently claims that the viral vector that carries the genetic material was not aimed to treat a disease but to correct a DNA mutation. It emphasized to demonstrate the safe yet effective viral cocktail delivery inside rod cells by using a fluorescent protein.

Since majority of retinal degenerative diseases are known to be caused by mutations that damage these cells it seems to be a difficult task for the researchers to target these photoreceptor cells for treatment. It is known that these photoreceptors in the retina transform a captured light into an electrical signal. This electrical signal is further interpreted by the brain.

In order to carry the gene of a green fluorescent protein a specific adeno-associated virus, AAV2/5 was used by the researchers from Penn and the University of Florida. This research was first conducted on dogs. Pieces of DNA were used as a switch to turn on the three different promoters for the production of the green fluorescent protein in rods. It appeared that although two viral cocktails were able to turn on the production of the green fluorescent protein specifically in rods and the third cocktail targeted rods, cones and other retinal cells each viral vector proved to be just right in terms of proper concentration. When the viral titers in the order of 1011 vg/ml were used an appropriate rod transduction with the preservation of retinal structure was achieved with mOP and hGRK1 promoters.

William A. Beltran, assistant professor of ophthalmology at Penn’s School of Veterinary Medicine and director of the research announced, “Now that we’ve demonstrated this type of delivery can be accomplished the next step is to target common rod degenerations using canine models that mimic the human diseases. The delivery of a viral vector, coupled with a rod-specific promoter is likely to be the safest and most efficient approach to correct diseases such as X-linked and autosomal dominant retinitis pigmentosa, both of which lead to complete blindness.”

The first and till date the only inherited retinal disease is known to be a form of childhood blindness called RPE65-Leber’s congenital amaurosis, LCA. A gene therapy is being conducted for this disease in three on-going clinical trials. Initially, some of the scientists conducted the tests on dogs before practicing the same on human patients.

The research appears in the current issue of the Journal of Gene Therapy.