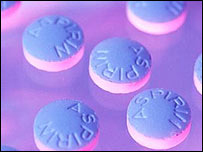 Researchers have found yet another benefit of Aspirin. Taking an aspirin a day can help prevent bowel cancer.

Now, a new study has been published which finds that taking a daily dose for five years can prevent the occurrence of bowel cancer later on in life.

Usually, doctors discourage people from taking aspirin over long periods of time because of the risk of internal bleeding as well as internal ulcers.

However, this new study says that although the general population should not take aspirin to prevent cancer, the benefits may outweigh the risks for those with a higher-than-average likelihood of developing the disease.

Here is what the researchers wrote: “Use of 300mg or more of aspirin a day for about five years is effective in primary prevention of colorectal cancer, with a latency of about 10 years, which is consistent with findings from observational studies.

“However, with the concerns about the potential risks of long-term aspirin use and the availability of alternative prevention strategies (e.g. screening), these findings are not sufficient to warrant a recommendation for the general population to use aspirin for cancer prevention.”