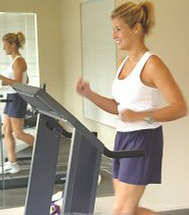 A new research has revealed that women in their 70s who are regularly active could escape painful arthritis symptoms. As part of the research data on middle aged (48-55) and older (72-790 women, collected using surveys over three years as part of the Australian Longitudinal Study on Women’s Health was examined.

Women who reported arthritis symptoms at the beginning of the study were excluded, and the authors examined those, who began reporting stiff or painful joints frequently and the amount of exercise they undertook.

Researchers found that for women in the older age bracket, a little over an hour of moderate physical activity each week will lessen the chances of developing frequent arthritis symptoms in the next three years.

Pushing that up to 2 ½ hours per week is even more likely to prevent arthritis symptoms appearing. These results were not seen for the middle-aged group.

Exercising into old age could ensure movement without stiffness and pain for longer, and could reduce the burden of arthritis on the healthcare system.