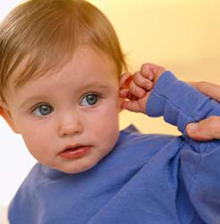 Experiments on mice have shown that a nasal spray containing viral enzymes, lysins, may prevent children from the painful earache caused by the Streptococcus pneumoniae bacterium.

S. pneumoniae bacteria live harmlessly in the nose until respiratory viruses come along and disrupt the nasal membrane, allowing it to migrate to the middle ear and start infections.

Bacteria-infecting viruses called phages use lysins to destroy bacterial cell walls in order to escape and infect other cells.

Vincent Fischetti of Rockefeller University in New York and Jonathan McCullers of the St Jude Children’s Research Hospital in Memphis, Tennessee, conducted a study to show how lysins could destroy S. pneumoniae.

They infected mice with nasal S. pneumoniae, and then treated them with a lysin spray or a mock spray containing no enzyme.

Thereafter they infected the mice with a flu virus and found that animals treated with lysin did not develop ear infection, while eight out of 10 of those given the mock spray did.

The researchers say that the lysin that targets S. pneumoniae does not damage the harmless “commensal” bacteria that protect the ear from other infections.