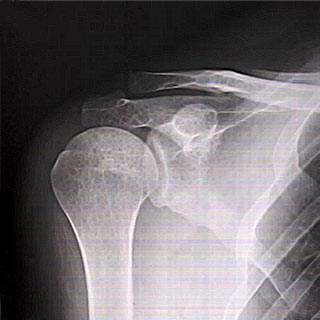 There may be a way of relieving patients from the pain that they have to bear due to calcific tendonitis of the rotator cuff in their shoulder. A team of Italian investigators have stated that an ultrasound guided minimally invasive procedure may succeed in treating such patients and providing quick relief from symptom pains.

Calcific tendonitis is noted to a condition which leads to the development of calcium deposit within the tendons of the body, causing inflammation and pain. However, it mostly causes the formation of calcium deposits within the tendons of the rotator cuff in the shoulder. This condition is noted to most often affect 40+ adults. Usually anti-inflammatory drugs or physical therapy seems to be helpful in treating the less severe cases. On the contrary, for more severe cases often patients may have to undergo an open surgery or shock-wave treatment. Although open surgery may treat the condition, it may even have a slight chance of leading to tendon rupture, among other complications.

In contrast to these techniques, the non-surgical treatment is believed to not only reduce the amount of pain felt by the patients suffering from the disease, but also restore a lasting mobility post their treatment.

“With this treatment, we were able to establish a single inexpensive and effective treatment for calcific tendonitis of the rotator cuff. This has never happened before,” says co-author Luca M. Sconfienza, M.D., from the Unit of Radiology, IRCCS Policlinico San Donato, University of Milan School of Medicine in Milan, Italy. “Symptoms improved in patients treated with our procedure compared to non-treated patients.”

Dr. Sconfienza is hopeful that the ultrasound-guided percutaneous therapy may succeed in substituting the remaining techniques which involve various risks of facing complications. This is a 20 minute practice for which the patient’s shoulder is anesthetized. Following this, a radiologist injects a saline solution into the rotator cuff via ultrasound guidance. This solution is injected with the purpose of washing the area and breaking down the calcium deposits present there. After this, with a second needle the calcium residue is then withdrawn.

Dr. Sconfienza says, “People with calcific tendonitis should know that with a simple, one-time ultrasound-guided procedure, they could recover completely from the terrible pain constantly affecting their shoulder.”

For the purpose of the study, a number of patients suffering from calcific tendonitis were evidently treated with the above mentioned therapy, while a second group acted as controls and were not treated. Following the therapy, all these patients were believed to have been followed periodically after a period of about 1 month, 3 months, 1 year, 5 years and 10 years.

Dr. Sconfienza, Giovanni Serafini, MD from the radiology unit at Santa Corona Hospital, Pietra Ligure, Italy and colleagues observed a major improvement in the patients treated with the ultrasound-guided percutaneous therapy. Apparently, there seemed to be lesser pain and an enhanced mobility of the affected area in the treated patients, as against to those who were not treated with this procedure.

It was noted that this particular procedure could be adopted and performed in all the hospitals having ultrasound equipment with a superficial probe. Notably through this inexpensive treatment, a large number of people suffering from the disease could achieve immediate relief.

The findings of this study have been published in Radiology.