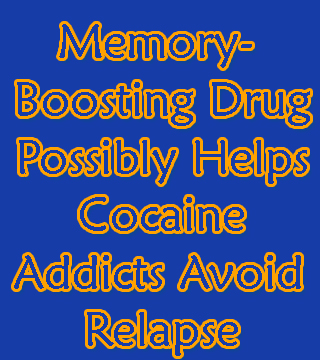 The hazardous effects of addictive drugs on the physical and mental well-being of an individual cannot be ignored. A new research suggests memory-boosting medication along with behavioral therapy to help resist addiction to drugs. It has been revealed that medications like D-cycloserine seem to assist extinction therapy for restricting relapse in cocaine addicts.

It has been revealed that cocaine-associated ‘cues’ are not very much able to result in relapse with behavioral therapy and memory drug. During prior investigations, D-cycloserine was probably employed to treat fear and anxiety disorders. But the scientists suggest that it can be beneficial for an addict to resist drugs even while facing drug-related cues after treatment. Most substance abusers seemingly find it very difficult to overcome their addiction. A single environmental cue like a drug-related sight or smell can possibly develop cravings.

“Extinction therapy usually only works where the therapy takes place, like a treatment center. Using drugs like D-cycloserine to make extinction work more broadly is a big advancement in the treatment of addiction,” enlightened Mary Torregrossa, PhD, of Yale University, led investigator.

The research triggered on 168 rats, examined self-administered cocaine for weeks which is assumed to be a behavior noticed in addicted humans. A type of behavioral therapy known as extinction therapy was employed. This therapy enabled scientists to dampen the craving-inducing effects of cues. Therapy was provided with the memory-enhancing drug.

Barry Everitt, PhD, of the University of Cambridge, an expert in addiction and the brain explained, “The study suggests that boosting the activity of glutamate in a specific area of the brain removes this context-specificity of extinction, and might therefore make existing addiction therapies more effective.”

An individual addicted to drugs may quit while under treatment and even after the completion. But utilizing the present drug associate may trigger cravings for drug-taking. Extinction therapy may then break these dangerous, omnipresent cues and drug use.

So extinction therapy paired with D-cycloserine appears to fight against relapse by cues in new environments also. The medication is believed to work in the nucleus accumbens which is an area linked with drug addiction and the formation of drug-related memories. It was ascertained that D-cycloserine acts at specific kinds of receptors for the neurotransmitter glutamate. This glutamate is known to be a chemical that is important in learning and memory.

The research is published the August 4 issue of The Journal of Neuroscience.