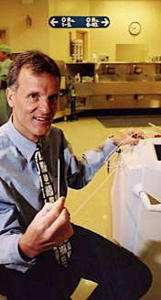 Indrajit Roy, 32, who was diagnosed with kidney stones wanted to get the best cure at an affordable cost. So, when a hospital in Kolkata promised to remove the stone in a bloodless laser-aided operation at less than half the fee quoted by other hospitals, he knew his prayers were answered.

Roy was taken to the city’s Anadalok Charitable Hospital in Salt Lake, where doctors found a 500-gram stone embedded in his kidney.

The doctors opted for laser technology instead of the traditional open surgery method, keeping in mind the enormous size and weight and the kidney stone.

The operation was absolutely bloodless and the patient was cured without any post-operative complications.

According to Anandlok Charitable Hospital secretary, D.K. Saraf, “With the induction of the laser technology, we have successfully treated over 200 patients suffering from kidney stones in the last year. The unique feature of this technology is that the patient does not undergo any blood loss or pain.”

He also added that the patients don’t have to stay more than two nights at the hospital when undergoing the laser treatment for kidney stones.

Laser technology was brought into the urology department of the hospital just last year in 2006. Since then, it has helped to cure over 200 patients suffering from kidney stones at a very affordable cost that too.

The Holmium laser machine was brought in from Germany for Rs.4.5 million.

Anandlok urologist Amit Ghose said that on an average, 800 patients come to the hospital every year with kidney stone-related ailments.

Ghose added that it is mostly people who live in tropical countries who get kidney stones. This condition is also related to heredity and day-to-day food habits.