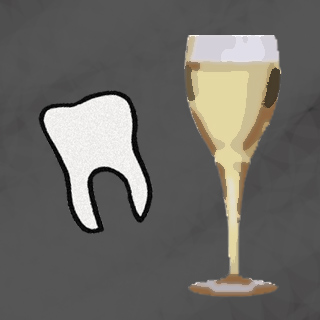 Various previously conducted studies are said to have highlighted the advantages of the consumption of wine, on the over all health. However, a recently conducted study says otherwise. They have stated that drinking a lot of white wine may prove to be harmful to the teeth. This astounding revelation was made by the New York University.

They have also stated that the stains on teeth may get darker after they come in contact with white wine. In order to better understand this potential causal effect of white wine on teeth, the study investigators analyzed two sets of cow teeth. Cow teeth was said to have been used because of its close resemblance to human teeth.

The experts then with the help of a spectrophotometer, evaluated the level of these stains. A spectrophotometer is believed to be a device that is used to assess the level of stains, by measuring the color intensity. Through this device, the investigators observed that the teeth immersed in white wine seemed to stain a lot darker than the other set of teeth.

“Dipping teeth in white wine for one hour is similar to the effect of sipping the wine with dinner,” said Dr. Mark Wolff, Professor and Chairman of the Department of Cariology & Comprehensive Care at New York University College of Dentistry.

Wine is said to have an acidic reaction which affects the surface of the teeth, by creating pores and grooves. The study experts then noted that these grooves permit chemicals from other beverages like tea or coffee to settle in them. This in turn, seems to cause darker stains on the teeth.

However, the study experts noted that when the experiment was repeated with red wine, it seemed to cause darker stains as compared to white wine. Dr. Wolff explains this by saying that, “Red wine, unlike white, contains a highly-pigmented substance known as chromogen.”

It was further stated that the investigators suggested wine connoisseurs not to worry about such stains. The use of toothpastes containing whitening agents were suggested as an alternative to keep such stains at bay. These toothpastes were believed to be capable of preventing the formation of such stains on the teeth.

These findings were presented at the annual meeting of the International Association for Dental Research in Miami.