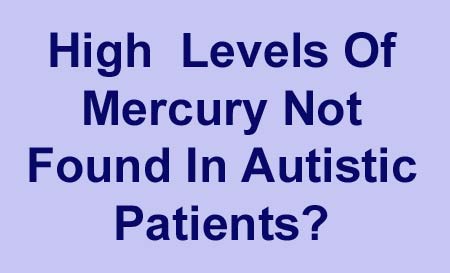 Many theorists have proposed that autism is related to mercury toxicity. To test the hypothesis, scientists from the North Yorkshire and York Primary Care Trust conducted a study, where no apparent link between autism spectrum disorders (ASDs) and mercury concentration came forward.

As part of the trial, 56 children suffering from autism spectrum disorders were pitted against their siblings. A control group constituted kids who were devoid of autism. The creatinine blood test was performed for all the study subjects.

As per the outcomes of the study, larger concentrations of mercury did not seem to be present in the urine of children affected by autism. This outcome was irrespective of whether or not the trial was adjusted for variables like amalgam fillings, age, gender and so on.

Thus, the findings did not support the hypothesis that harmful levels of mercury are found in the urine of autism patients. However, certain areas of the trial necessitate further probe, the team believed. Especially as the study comprised a small number of participants, the results need to be replicated in a larger study group.

The report titled, ‘A Comparison of Urinary Mercury between Children with Autism Spectrum Disorders and Control Children’ is published in the February 15 issue of the journal, PLoS One.