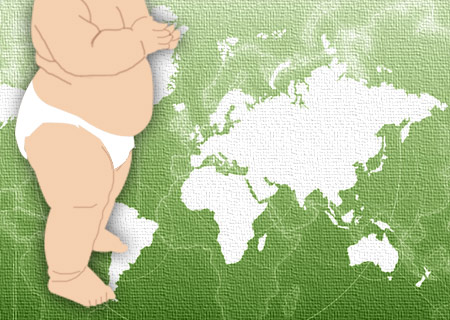 A chubby child could be a sitting ‘time bomb!’ Yes you heard it right. While no sight for parents is more appealing than a cute little chubby child and they would probably do anything and everything to make their little one rolly polly, a second thought might just be needed for the aforementioned statement. No tonic, syrup or food item which is advised by some relative or by some form of media is spared from being fed in the hope of making the child chubby. But little do they know that this ‘apparently’ healthy child is not ‘really’ healthy, precisely because he is so cuddly. He might be on the path of one of the greatest and most serious lifestyle diseases of today in urban children – Childhood Obesity.

Research has shown that today’s most epidemics and gravest diseases-namely hypertension and diabetes partly have their origin in faulty dietary habits of childhood. 15% of children worldwide are obese and another 15% are at the risk of becoming overweight. Of these 2/3rd will go on to become obese adults. Overweight and obese children tend to remain obese in adulthood and fall prey to lifestyle diseases like hypertension and diabetes.

Children of today’s so called upscale cities are victims of consumerism and aggressive marketing strategies target these innocent minds to sell everything from cars to life insurance. They are sitting ducks for confectionary companies and manufacturers appear to be using this to the hilt. Biscuits, chips, colas, chocolates, burger and pizza manufacturers have separate units to create products catering to their little consumers because parents are more than happy spending to see their little one joyous! Whether the child should be eating it or not, whether the child needs it or not, whether the food will harm him or not are all secondary, as long it keeps the child from crying and howling. As Metallica puts it ‘Nothing else matters!’

Watching the idiot box, playing computer games or spending hours with an X-Box, PlayStation and Nintendo eat away a major part of the time of today’s growing child. Astoundingly watching images flash by on the screen, the child doesn’t seem to be using his analytical skills to think, question or scrutinize anything that is happening on the screen. Besides, they sit and munch on junk snacks like chips, biscuits for hours together which could actually be the real cause of the development of overweight kids at such tender ages. The time that should be spent interacting with human beings and nature around them seems wasted in watching meaningless cartoons. The media uses it to bombard their brains with advertisements of all possible things which only further seems to spoil the child’s habits, breeds unhealthy competition amongst them and makes them stubborn in the long run.

But how does one define whether their child is obese or is just genetically on the chubbier side? WHO has published Growth Charts in 2006 which allow a visual graphic assessment of the child’s height, weight and head circumference (up to 3 yrs) in correlation with the age for children up to the age of 18 years. Simply by keeping a record of these three easily measurable parameters, parents can see whether their child is malnourished and underweight, healthy or overweight. Each and every parent and pediatrician must plot these charts, every month for the initial 3yrs of childhood and every 3 monthly later on. For every child, this will help keep a tab on the health and catch an erring one as soon as possible and correct it.

This shall go a long way not only in making each child healthy and happy, but also in identifying children that may be silently harboring some chronic disease while also being able to take prompt action in remedying it. Considering a healthy child grows on to become a healthy adult who contributes in multitudinous ways to the society, it’s certainly little effort.

Having identified the problem, how does one correct it and if the problem has not occurred yet, how does one prevent it? A healthy, balanced and complete diet devoid of junk food other than on occasions is the answer to both.

Small steps go a long way especially when taken in the formative years of the child. It conditions not only children’s habits but also their behavior patterns, their personality and overall health in the long run. Thus, it is important to make a healthy today for a healthy tomorrow.