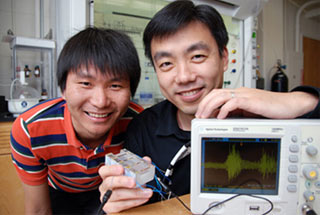 When a substance attains an electrical charge on being pushed or distorted, it can be referred to as piezoelectric. In a unique experiment conducted by engineering students and professors from the University of Wisconsin-Madison, a plastic microbelt that seemingly vibrates when low-speed airflow such as human breath passes through it, has been created.

The material used in this trial is polyvinylidene fluoride (PVDF) which apparently acquires an electric charge as a reaction to mechanical force. The team programmed PVDF to produce adequate energy from respiration to activate tiny electronic instruments.

“Basically, we are harvesting mechanical energy from biological systems. The airflow of normal human respiration is typically below about two meters per second. We calculated that if we could make this material thin enough, small vibrations could produce a microwatt of electrical energy that could be useful for sensors or other devices implanted in the face,” commented Materials Science and Engineering Assistant Professor Xudong Wang.

The scientists are exploiting the advances in nanotechnology and miniaturized electronics to create an array of biomedical devices such as instruments to keep a check on blood glucose for diabetic patients or enabling a pacemaker battery to be charged, thus eliminating its need to be replaced. These tiny devices appear to need only a miniscule proportion of power supply to function. Waste energy by means of blood flow, movement, heat or respiration as seen in this test, could act as steady suppliers of power.

Wang and his colleagues utilized an ion-etching process to reduce the thickness of the material while conserving its piezoelectric properties. With some modifications, they believe that the breadth can be cut down to the sub-micron level. Also, PVDF being bio-compatible, the development shows a substantial advance in developing a micro-scale device for storing energy from respiration.

The findings are published in the journal Energy and Environmental Science.