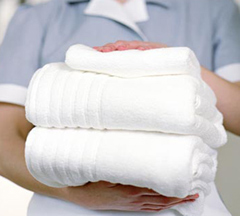 But if your delicate laundry can’t take the heat, researchers also suggest another way to reduce dust mites and allergens in the laundry: wash at a lower temperature (between 86-104 degrees Fahrenheit) and then rinse the laundry twice with cold water for at least three minutes each.

The results showed that washing laundry at hotter temperatures was significantly more effective than warm water at killing dust mites as well as other allergens. For instance:

The study also showed that steam cleaning of the sheets was equally effective as hot water (140 degrees Fahrenheit) washing at killing dust mites and removing dog dander and pollen.

In addition, researcher Jung-Won Park, M.D., Ph.D., of Yonsei University in Seoul, South Korea, and colleagues found rinsing laundry twice in cold water was also effective at removing all traces of dog dander in laundry washed at any temperatures.